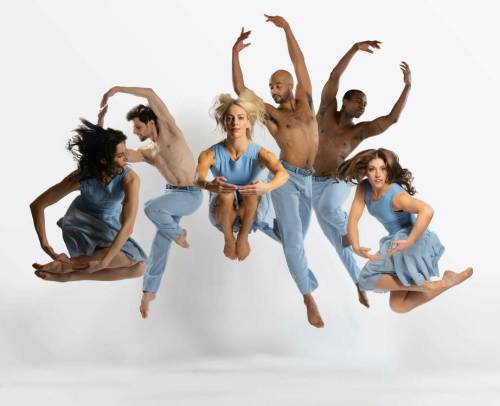 Few choreographers begin their careers with what would be their seminal work. David Parsons did just that with his 1982 work “Caught”.  On the greatest hits list of modern dance works of the 20th century, “Caught” was one of five works Parsons Dance performed Saturday night at The University of Akron’s EJ Thomas Hall.

Presented by The University of Akron’s Dance Department and DANCECleveland to open its 2019-20 mainstage season, the popular NYC-based company was last in Northeast, Ohio as part of DANCECleveland’s 2015 season.

Parsons Dance in “Round My World”. Photo by Travis Magee.

Parsons Dance’s mixed repertory program capped a week-long residency at the University and led off with Parsons’ 2012 work “Round My World” to music by Canadian-born cellist and composer Zoë Keating.  Constructed on themes of roundedness and circularity, Parsons’ choreography for the zippy work took those themes and ran with them. The troupe’s 6 dancers engaged in a myriad of rounded arm and circular movements and jumps. The visual equivalent of an ear worm, Parson’s pleasant choreographic patterns lodged themselves in the viewer’s mind circling round and round.

Next came choreographer Trey McIntyre’s latest work set to a suite of songs from a popular music artist, “Eight Women” (2019). Danced to music by the late Queen of Soul, Aretha Franklin, the work for the company’s 8 dancers had a similar vibe to “Round My World” but with a funkier approach. In it, Parson’s dancers led by Henry Steele, interpreted the mood of such Franklin hits as “Spanish Harlem,” “I Say A Little Prayer” and “Natural Woman” via breezy, direction-shifting hops and turning steps that were soothing to watch. 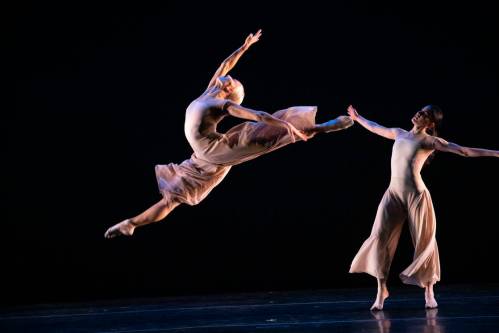 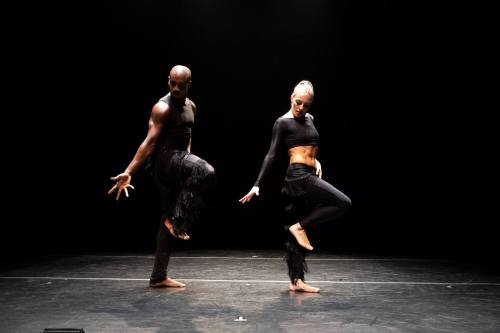 A protégé of Paul Taylor, whose company he danced for many years, many of Parsons’ own works show influences of Taylor in their style. “Microburst” (2018) was not one of them. The somewhat unique dance work mixed elements of tap and modern dance to an original Indian tabla score by Avirodh Sharama.  Reflecting the work’s title, the sound effect of a storm ushered in the piece in darkness. Then the stage lights came up on a quartet of dancers whose microbursts of movement were tied to and punctuated notes in the illustrative drum music. Originally performed with a live tabla player onstage, Parsons added the placement of a small silver bell onstage as a stand-in for the missing musician that was rung once during the piece by dancer Zoey Anderson.

Substituting tap and modern dance movement and attitude for the traditional Indian dance choreography one might expect paired with the tabla score, the engaging work was a breath of fresh air in its appeal and in the charm it allowed dancers Anderson, Shawn Lesniak, Deidre Rogan and Joan Rodriguez to exhibit in their dancing.

Then, after a quick costume change by Anderson, the blonde-haired powerhouse from Utah performed “Caught”.

Created by Parsons and company co-founder and lighting designer for all the works on the program Howell Binkley, the 6-minute solo to music by Robert Fripp used a strobe effect and a hundred or so jumps to give the illusion of Anderson flying about the stage not touching ground but for a few pauses to stand in spotlight in a military at ease pose center stage.  An audience favorite, the work has been performed over 2,500 times mostly by male company members. Anderson was spot on in her performance of the work garnering the stunned reactions and appreciative applause audiences generally give the work.

Rounding out the program was Parsons’ 1990 nod to Brazilian culture, “Nascimento” (Portuguese for “birth”). A frequent program closer, the work was inspired by and set to an original score by Brazilian singer/songwriter Milton Nascimento, Parsons’ 8 dancers skipped and bounded about the stage in joyous and playful choreography full of kicks, spins and lifts to an infectious beat that dared you to try and sit still.

Per usual Parsons Dance delivered a program of works with one goal — to entertain.  A rousing standing ovation at program’s end signaled mission accomplished.

The humid matinee program on July 19 in the sweat box known as Cain Park’s Alma Theater opened up with a reprise of Miami-based choreographer Rosie Hererra’s “House Broken” (2014). The dark comedy about suburban life and its disillusions struck a purposeful balance between humor and heartache. The contemporary work, which I reviewed in February of 2014 (click here to read) held the same charms as in its premiere drawing the audience in with its collection of everyday life vignettes taken to quirky, absurd and often poignant extremes.

Set to familiar tunes by Tom Jones, The Turtles and Pete Seeger, “House Broken” began with sound effects of failed attempts to start a pull-start lawnmower. Then the roar of the engine coming to life launched the work’s five dancers into a series of emotional ups and downs portraying a host of archetypal characters.  A bored Marquez pitched golf balls (actually ping pong balls) into the audience, suburban “super dad” Damien Highfield aboard a working treadmill encapsulated in minutes his daily march through life in humorous fashion pushing a baby carriage in three piece suit while talking on a cell phone and then stripping off his business attire and showering and shaving. The work’s three female dancers Garson, Annika Sheaff and 2015 Cleveland Arts Prize recipient, Felise Bagley were seen and heard barking like dogs, corralling golf balls with their crotches and whipping their heads and long hair in violent circles.  Adeptly performed, the neatly packaged and memorable dance work was a sobering reminder of “life’s not so rich pageant.”

The program’s second work, “Remora,” whose definition can mean a type of fish having on its head a sucking disk by which it can attach itself to other aquatic life, ships, and other moving objects, began its creation in the studio at Cleveland State University literally from the roll of dice. That was one of the devices choreographer Eric Michael Handman, an associate professor at the University of Utah’s Department of Modern Dance, used to direct GroundWorks’ dancers into movement creation. The dice role, using one standard die and two others with body parts and German action words on them, initiated movement exercises GroundWorks’ five dancers and Handman used to help create material for the work.  Unlike the traditional choreographic model where the choreographer makes up steps and teaches them to the dancers to perform, Handman is one of a growing number of choreographers who lean heavily on the dancers to create movement. He directed the creative process and then assembled, organized and edited the dancer generated material into a finished work.  The results were impressive. 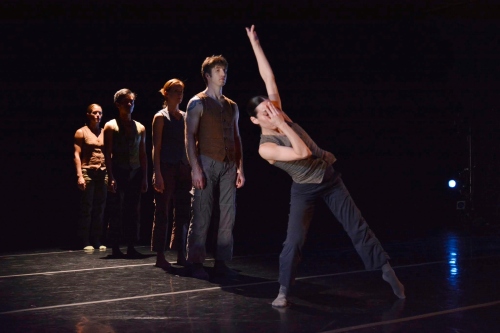 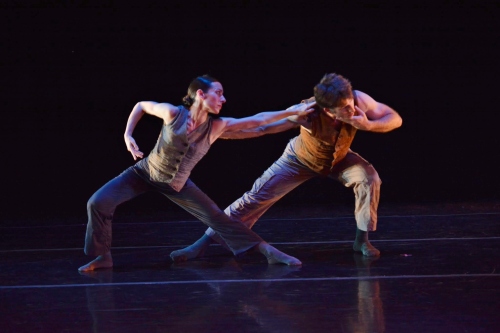 The world premiere of the abstract “Remora” set to a moody, cinematic original score by fellow University of Utah faculty member Michael Wall, meandered through a series of undefined personal relationships between the dancers that Handman described in an earlier interview I had with him “as a low burning human drama.”

Delivered in a succession of solos, duets, trios and group sections, the work utilized a familiar contemporary movement language seen in many of GroundWorks’ pieces but with a fresh perspective. Like the aforementioned fish, the dancers latched onto each other at times and were carried along in movement phrases that were technically vibrant and visually appealing. Of note were a sharp, angular solo by Bagley that breathed elegance and a solo by Sheaff in which she moved briskly in a semi-crouched position a la a martial arts kata.  It was the work’s final duet danced by Bagley and Highfield however that really stood apart (and quite frankly could have stood on its own).

Danced to music emotive of longing, the pair pushed, pulled and collected each other in wanting embraces. A touch of an arm or a nudge of a leg sent the two swirling in and out of deep body leans and meaningful grasps that altogether spoke directly to the heart.

Danced to foot-stomping tunes like Mae “Big Mama” Thornton’s “Hound Dog” and John Lee Hooker’s “Boom Boom” along with songs of heartache like Aretha Franklin’s “Today I Sing the Blues” and Odetta’s “Another Man Done Gone,” the solidly-crafted work mixed playful strutting, shimmying and shaking with melancholy sinking and swaying.

With the Cain Park program GroundWorks’s dancers as a unit once again showcased a skillset and performance quality unrivaled in the region. Both Garson and Marquez acquitted themselves nicely in their debuts. Garson, a more natural fit, impressed with her expressiveness and mature stage presence.