CorningWorks’ ‘with a shadow of…’ a Muddling of Liminal Space 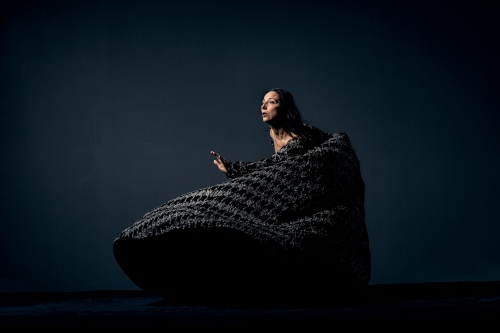 Catherine Meredith in CorningWorks’ “with a shadow of…” Photo by Frank Walsh.

In the lead up to her latest GLUE FACTORY PROJECT work with a shadow of…, dancer/choreographer Beth Corning said “I hope nobody makes any sense of this work; none.”

Pittsburgh’s queen of metaphor outdid herself with the hourlong collection of mind minutia and movement that proved as baffling as it was visually breathtaking.

Thematically said to reflect “the moment before sleep and the moment before waking,” with a shadow of… did well in capturing the surrealness of such moments.  Where the dance-theater work fell short was in conveying purpose beyond that initial idea and in achieving the deep-reaching emotional connections with the viewer that have been a hallmark of Corning’s works. Having over the years taken in the breadth of Corning’s works created for her now 10-year-old organization CorningWorks, in some ways with a shadow of… may be the least impressive choreographically while also being a bold visual step forward for one of the region’s most intriguing dance artists.

The final performance of the work’s run on Sunday, March 31 at the New Hazlett Theater began with a prelude dance improvisation by cast member Janis Brenner.  On a darkened stage, Brenner, an award-winning choreographer herself and the artistic director of Janis Brenner & Dancers in New York, darted in and out of shadow performing an energetic modern dance solo as audience members filtered into the theater.  The sound effect of a cell phone ringing ended her solo and officially began the work.

Danced to a montage of atmospheric music with a shadow of… bounced between vignettes that bordered on genius and tedium.  The opening vignette had New York dance icon David Dorfman pulling a curled up and supposedly sleeping Brenner in a red wagon around the stage and continuing to act as if doing so after he had let go of the wagon’s handle.  It was followed by Corning and the work’s final cast member Catherine Meredith (choreographer and rehearsal director for Cleveland’s Dancing Wheels) in each other’s arms rolling on to the stage like human tumbleweed.

Janis Brenner in CorningWorks’ “with a shadow of…” Photo by Frank Walsh.

That scene led into the work’s first bit of tedium, watching the cast members piled upon and rolling over one another for an extended period. A go to move for pop up improvisation sessions and student choreographers, “the moving pile of bodies” is one of dance’s most boring clichés. Undoubtedly a metaphor related to the partial inspiration for the work, Corning’s feelings that current U.S. political and social climates have created a reality in which little makes sense, the dance phrase perhaps intentionally played into that dulling of the senses.  Repeated later in the work, it was made more palatable when Brenner, standing and shadowing the pile of dancers as they rolled about, pulled from her pocket a clementine that she peeled and ate while waiting for something interesting to happen in the moving pile — nothing did and maybe that was the point.

While the work contained a few more mind-wandering-off-to-make-a-grocery-list-moments such as Brenner dragging around a potted tree on an upper side balcony, there were also delicious nuggets such as a sweeping and dreamy solo by Meredith in a long dress that she melted into after Corning carried her onstage on her shoulders, and a breathy and fun full cast unison dance that saw Dorfman become giddy with the joyful feeling of it.

The unequivocal star of the production however was Iain Court’s brilliant lighting and stage effects worthy of a Broadway production.  Bathed in an almost constant stage fog, the dancers moved through dazzling lighting patterns and spotlights that not only highlighted them but sometimes followed after them like a puppy dog.  Easily the most ambitious and successful of the Corning and Court collaborations to date, the visual theatrics culminated in a genius moment with Corning dancing a slow-moving, Isadora Duncan-like solo under a heavy waterfall of stage fog.  Partially obscured by the fog at all times, Corning’s graceful and fluid hand and arm movements appeared and disappeared from view like a siren call to the audience to come join her.

As with all of Corning’s works, they are essentially a response to the human condition. And like most choreographers she would like audiences to discover their own meanings, feelings and truths in her work. But with as celebrated a cast of performers as was assembled for with a shadow of…, one can’t help but wish the choreography and the driving purpose behind the work did more to let those talents shine.  As theatrical eye-candy however, with a shadow of… was a knockout.

After a successful New York debut of their program Past, Present and Future of Integrated Dance at Ailey Citigroup Theater in October, Cleveland’s Dancing Wheels brings a modified version of it to The Breen Center for the Performing Arts at Saint Ignatius High School on Saturday, November 4.

Hailed as “…remarkable …a company of first-rate trained dancers with and without disabilities” by New York dance critic Bonnie Rosenstock (click here to read the full review), the mixed repertory program of company favorites spanning Dancing Wheels’ 37 seasons will also feature the Cleveland premieres of choreographer James Morrow’s “Neither Lost Nor Found” and “Imagine, if you will …,” by Bessie Award-Winning choreographer David Dorfman. Also on the program will be a performance by students of The School of Dancing Wheels.

The company, which welcomed 6 new dancers this season, “has never been better and more jelled,” says Dancing Wheels rehearsal director/resident choreographer Catherine Meredith. “They did a fabulous job in New York.”

Putting the company’s newfound chemistry to the test was the creation of Morrow’s “Neither Lost Nor Found.” The urban-centric choreographer says he came to Dancing Wheels with a basic idea for the work and a choreographic sketch but didn’t know how it would pan out. “There was great communication between myself and the dancers… What I found extremely important was the reciprocity. We learned and evolved together.”

That choreographic sketch along with inspiration from Martin Niemoller’s iconic poem “First they came …” about the rise of Nazism, formed the basis of the work and its commentary on the current social and political landscape of the United States.

Says Morrow of the 10-minute group work: “[Niemoller’s] quote revolves around silence and the act of not speaking out when you identify injustice. As a white person navigating through this world, I have been silent when I shouldn’t have. I’ve been asleep and blinded by my own privilege…Dancing Wheels, the work they put out, the mission of the company, the performers, the community engagement they participate in, are all acts to combat silence. There is a political ‘stand’ or ‘sit’ in the representations within their performances, acts of rebellion or subversion to the hetero-normative, white supremacist, patriarchal society that many of us sleep through day in and day out. I want ‘Neither Lost Nor Found’ to evoke that will, that drive…and hopefully wake a few people ‘sleeping’ in the audience.”

Dancing Wheels dancers in David Dorfman’s “Imagine, If you will…” Photo by Scott Shaw.

Like Morrow, Dorfman’s new work was inspired by the current social and political climate in the U.S. but filtering it through the lens of those with disabilities. A mainstay on the New York dance scene, Dorfman says a few things ran through his mind in creation process for the 17-minute “Imagine, if you will …”

“When working with folks of differing physical or emotional abilities or capacities, I often marvel at how much we as, more than not, ‘able bodied’ dancers take for granted and how much we as Americans take for granted,” says Dorfman. The group work, set to music by Liz de Lise, Omar Souleyman and Denver alternative country band Wovenhand, is an attempt says Dorfman, to let the audience “‘imagine,’ and plainly see the dancers’ greatness, courage and kindness.”

One of several repertory works to be reprised on the program will be Los Angeles choreographer Sarah Swenson’s 2015 work “Clamor.” Set to an original score by Swenson’s husband Alessandro Girasoli, the contemporary dance work reflects on disability rights and the 1990 Capital Crawl which helped propel the passage of the Americans with Disabilities Act. Dedicated to the memory of activist Kenneth Irving Zola, the work, says Meredith, brings home through its “Politico” character, the realization that anyone at any time can become disabled. 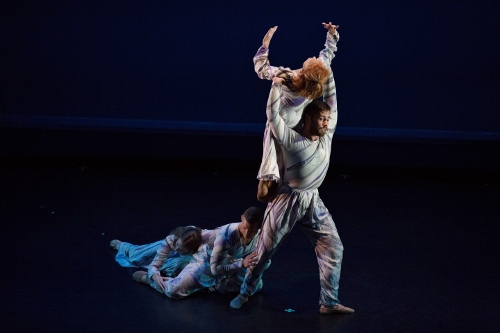 Also on the program will be reprises of Daniel Job’s “Above” (1991), the first work Dancing Wheels’ founding artistic director Mary Verdi-Fletcher performed out of her wheelchair, and an excerpt from Donald McKayle’s 2012 work “Far East of the Blues” set to a suite of Duke Ellington music.

Rounding out the program’s offerings will be a work by Gabriella Martinez created on the students of The School of Dancing Wheels, and a reprise of Meredith’s “Pallas Athena” that premiered this past June as part of Dancing Wheels’ The Best of Bowie program.

Performed to David Bowie’s song “Pallas Athena (Don’t Stop Praying mix No 2)” off his 1993 album “Black Tie White Noise,” Meredith says of the dance work, “I drew upon my experiences in New York City and London nightclubs where people who may or may not identify as male or female, he or she, could come, be accepted, and not be ashamed of who they truly were. For many, the DJ and the club acted as a god and church/sanctuary.”