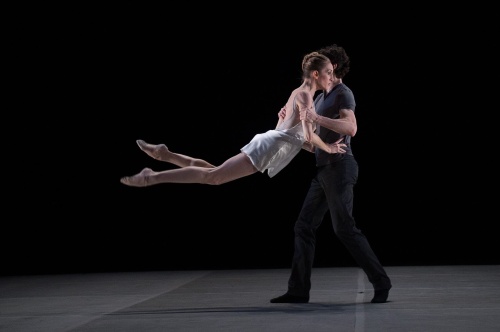 By Steve Sucato
Special to the Plain Dealer

CLEVELAND, Ohio — Following in the footsteps of other ballet stars like Mikhail Baryshnikov that made late-career transitions from ballet to contemporary dance styles, former New York City Ballet star Wendy Whelan, seeing the writing on the wall after 30-years with NYCB, launched her Wendy Whelan New Works Initiative.

What has been remarkable about Whelan’s transition more so than most, is rather than easing into the change, she cliff-dived into it. In short order, even before her official retirement from NYCB last October, she began crash courses with four different dancer/choreographers in four movement languages foreign to the way her body was used to moving to create “Restless Creature,” the first production in her New Works Initiative.

The hourlong program co-presented by DANCECleveland and Playhouse Square at the Ohio Theatre Saturday night more than lived up to its pre-show hype giving the assembled audience a sumptuous dance memory to cherish for some time.

Danced to music by Max Richter, Olafur Arnalds and others, Cerrudo entered the stage first pouring forth contemporary dance movement in a solo that had his outstretched limbs leading his body into swooping dips and rises, careening turns and liquidly smooth sways. Whelan then joined him dancing with similar fluidity.

While not quite as silky smooth as Cerrudo, the waif-like and powerful Whelan’s carriage seemed to have shed a fair amount of its ballet rigidity since “Restless Creature” premiered in 2013. Both dancers were magical. Their partnering was elegant and effortless in Cerrudo’s divine choreography that even gave a nod to Balanchine’s iconic “Serenade,” a ballet Whelan must have danced countless times. 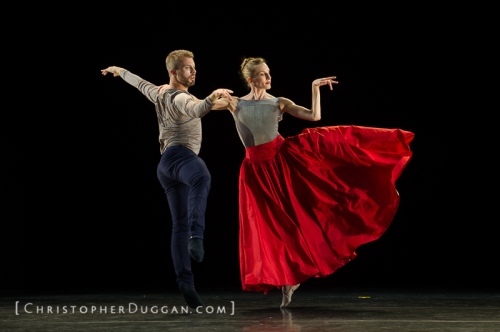 Choreographer Joshua Beamish’s “Conditional Sentences” (2015) was perhaps the least stretch for Whelan in terms of movement language. The courtly duet was infused with ballet steps and poses along with some tricky off-count starts and stops. But while Beamish and Whelan performed the call and response choreography expertly, they seemed to lack onstage chemistry and the work seemed to drag out and repeat itself.

Kyle Abraham’s “The Serpent and The Smoke” (2013) proved the evening’s most dramatic and resplendent work. Set to music by Hauschka and Hildur Guanadottir, the piece began with Abraham, aflutter like a whirling dervish, launching himself into a sequence of rapid turns and arm movements. 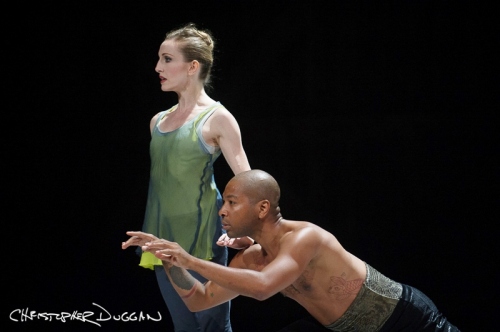 Wendy Whelan and Kyle Abraham in Abraham’s “The Serpent and The Smoke.” Photo by Christopher Duggan.

As a dancer, Abraham has a most distinctive way of moving that blends modern, contemporary and hip hop styles into seemingly steroid fueled movement riffs counterbalanced by tender moments of graceful serenity. Whelan bought into Abraham’s movement language wholeheartedly in her performance, circling him at the outset as if stalking him as he looked on captivated by her wispy movement around him. The two, simpatico in their dancing brilliance, exuded strength, sensuality and rare beauty in the riveting duet.

The program concluded with the Brian Brooks gem “First Fall.” To a score by Philip Glass, Brooks and Whelan melted into each other’s arms moving up and down across the stage like on a rapidly moving stream. Brooks’ modern dance choreography a la choreographer Doug Varone, was exceedingly pleasant to watch as were the two dancers in it.

In its latter stages, the pair engaged in a repeated sequence where Whelan fell trusting backwards onto a crouched Brooks’ back and then he slowly rose up carrying Whelan with him. The effect, and the work, was spellbinding.

With the diverse and immensely gratifying “Restless Creature,” Whelan showed she hasn’t lost any of her star quality. She and her partners danced brilliantly. Most impressive and promising for her future after ballet though was her deft choices of partners and the works they created for her.

Filed under The Plain Dealer

CLEVELAND, Ohio — Saturday’s “Founders Showcase” proved an emphatic exclamation point to The International Association of Blacks in Dance’s 27th annual conference and festival held for the first time in Cleveland.

The all-star program presented by Cleveland Dance Movement of some of the nation’s top dance companies  at PlayhouseSquare’s Ohio Theatre was unlike any in magnitude and quality in recent memory in Cleveland.

Ohio’s own Dayton Contemporary Dance Company kicked off the program with choreographer Kiesha Lalama’s “Shed.” Seven dancers in trench coats began slow hypnotic movement to John de Kadt’s drum poetry tune “This Rhythm is Not Mine” that soon gave way to a pulsing beat as the dancers shed their coats and dived headlong into uber-smart choreography that smacked one in the face with its super-cool attitude.

The dancers strutted and gyrated, pausing occasionally with music to exchange knowing glances at one another and eliciting shouts from the audience.

Next, in the first of several social commentary pieces on the program, was an excerpt titled “Search for Humanism,” performed by Los Angeles-based Lula Washington Dance Theatre.

A powerful statement on the recent killings of unarmed African-Americans, the work began with a symbolic mother figure stamping a long staff onto the floor and shouting “Stop killing my kids,” a phrase repeated in gesture throughout the piece. Set to jazz music by Marcus Miller and choreographed by Washington, the work used provocative imagery such as a dancer in a hoodie and slogans like “I can’t breathe” to drive home in a beautiful, sobering way the need for change.

A diamond amongst many jewels on the program, Dallas Black Dance Theatre’s “Memoirs,” choreographed by Garfield Lemonius, had everything going for it, including a moving score by Max Richter, beautiful imagery and stellar dancing.

Dallas Black’s 12 dancers in red appeared and disappeared from darkness at the rear of the stage, moving with grace and fluidity in wonderfully patterned group phrases interspersed with delicious partnering sequences that oozed Lemonius’ choreographic genius. 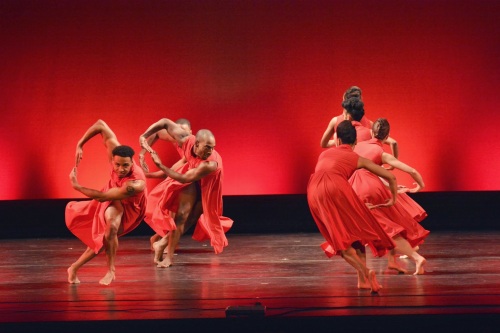 The work-in-progress commissioned by DANCECleveland performed to live bass and piano music featured a half dozen female dancers in street garb moving through Brown’s signature mix of conversational contemporary dance and tap movement that spoke volumes to a more genuine representation of black women in urban American culture. Brown’s street-wise choreography for it was slick, the performers mesmerizing. 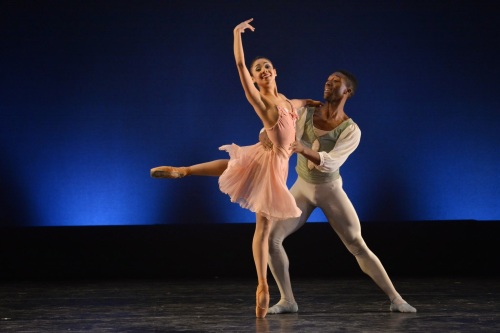 Rounding out the program were Cleo Parker Robinson Dance’s “Free?,” a dance based on the Civil Rights Movement, and “Latched,” a tour-de-force by Christopher Huggins with IABD founder Joan Myers Brown’s Philadanco.

A stylistic and emotional blend of hip hop and modern dance choreographed by Rennie Harris, the piece was adroitly delivered by CPRD’s dancers but came off a bit preachy in tone; Huggins’ relentless, fast-paced choreography, meanwhile, had Philadanco’s dancers streaming on and off the stage in combative athletic choreography depicting the combustive nature of interpersonal relationships.

A highlight of this dance season, IABD’s “Founders Showcase” hit a bull’s-eye with its engaging works and magnificent dancing. 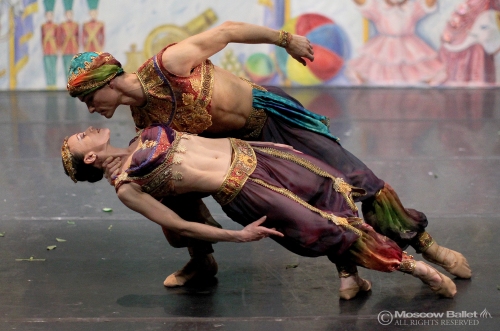 By Steve Sucato
Special to the Plain Dealer

As professional “Nutcracker” ballet productions go, there was little “great” about Moscow Ballet’s “Great Russian Nutcracker” Dec. 22 at Cleveland Music Hall. The choreography was oversimplified, the corps de ballet’s dancing was poor, and the gratuitous use of local child dancers in many scenes felt forced. However, the production was not without its charm and wow moments.

If one were looking for a kid-friendly “Nutcracker” production, this certainly would have qualified, especially in its treatment of the Uncle Drosselmeyer character. Instead of the mysterious and sometimes scary, eye-patch wearing magician found in many productions, Mikhail Mikhailov in the role was a friendly toymaker beloved by seemingly everyone and the pivotal figure in advancing the ballet’s somewhat unique storyline. Valentin Fedorov’s whimsical sets and giant animal stick puppets and Arthur Oliver’s colorful costumes brightened the stage and the mood of the production and several second act performances stood out.

The second of two shows the company performed Dec. 22 that featured a mixed cast of 40 professional dancers and 56 children ages 7 to 16 years old from several area dance studios, the ballet’s first act roughly followed E.T.A. Hoffmann’s familiar 1816 tale “The Nutcracker and the Mouse King.”  There was the party scene at the Stahlbaum’s ornately decorated home in which we were introduced to several of the ballet’s main characters, including its young protagonist Masha (Clara, in most U.S. productions) Stahlbaum, the niece of Drosselmeyer. The role was danced exquisitely by veteran dancer Ekaterina Bortiakova.

Bortiakova’s technical prowess, especially in her footwork and turns, coupled with an endearing smile and girlish innocence, was one of only a few truly “great” performances in this year’s East Coast cast of the Moscow Ballet production. The production tours the U.S. annually with multiple casts.