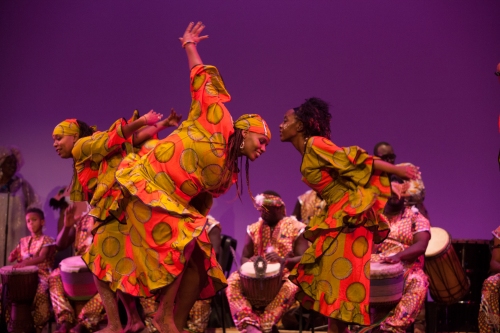 With Playhouse Square, the second largest performing arts center in the United States outside of New York, the Tony Award-winning Cleveland Playhouse, America’s first professional regional theatre, as well as one of the finest alternative theaters in the nation in Cleveland Public Theatre and others in the area, it is a wonder an international theater festival such as the new BorderLight International Theatre + Fringe Festival hadn’t come along sooner in Cleveland.

The inaugural event featuring 40 local, regional, national and international productions from 9 countries and over 100 performances on 11 stages, will take place July 24-27 at various venues/sites in Cleveland.

Founded in founded in 2016 by Dale Heinen and Jeffrey Pence, the lead up to the festival has included roundtables with community partners, fundraisers, mixers and special events, says festival associate producer/communications director, Cathleen O’Malley.

“Both Dale and Jeff aligned around a vision of European-style performance festival that would really make the most of Cleveland’s ample performing arts infrastructure and robust theater community we have here,” says O’Malley. “Cleveland is really built for an event of this kind.”

At the corps is touring international work of which all will be Cleveland premieres along with two North American premieres. The other major components of the festival are  collaborative projects between international artists and local theater organizations, and a fringe festival that champions non-traditional and experimental work. 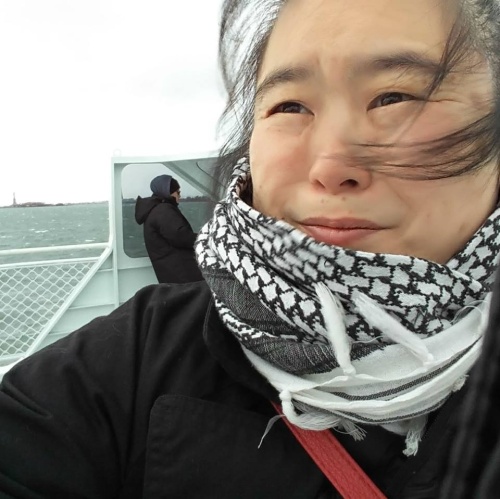 Produced by Raymond Bobgan and Cleveland Public Theatre, Good at Heart was created by and is directed by South Korean theatre-maker Hyeja Ju of B.K.G. Theatre, which translates to Actors, Audiences, and Spaces Theatre. B.K.G. Theatre creates new work seeking to explore the human essence through experimental theatre and actor-centered stagecraft. The 75-minute Good at Heart is a physical, non-verbal performance inspired by the story of Anne Frank, reminding us that genocide is a problem all people must be vigilant against. Contains: Violence / Violent Imagery, Racism, Antisemitism, Oppression, Violence. 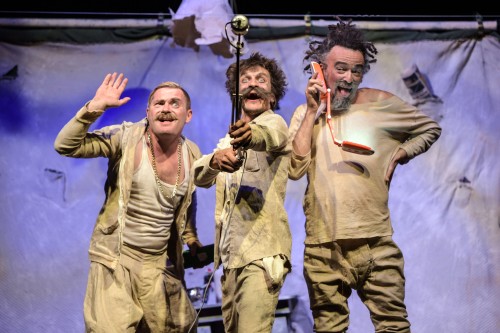 “Under Construction”. Photo by Ricardo Trejo

An award-winning physical comedy, Under Construction is a zany look at three eccentrics sharing a crammed, run-down flat and the predicaments they get into trying to have tea.

“The universe of a clown is an exaggerated mirror of human condition,” say cast members Vitaly Azarin, Alexey Gavrielov, Fyodor Makarov of Israel’s DAVAI group. “In this realm EVERYTHING is a predicament because the clown has no idea of who he is, where he is, and how in the world to fulfill his simple desire to have a cup of tea!”

The 90-minute intermission-less work is performed to an animated soundtrack by Losha Gavrielov with lighting by Ilya Gerchikov that the cast says “is intimately linked to the performers and also has a level of unpredictability. In other words, the technicians are also live performers and can surprise the actors and the audience.”

Also a part of the non-verbal production will be 693 props that help bring this quirky and unusual production to life. Says The Jerusalem Post: “The show is hysterically funny – its creators showcase wild fantasy and virtuoso clownery…” 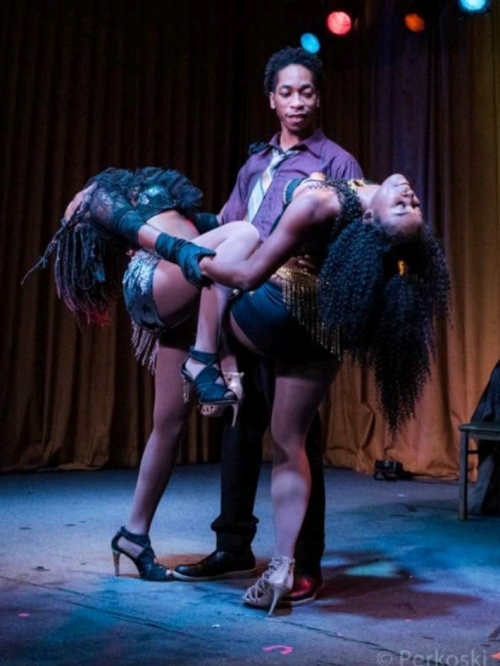 An inexperienced young man stumbles into an establishment after receiving a mysterious invitation. He is met by the host of the venue and so begins his journey of self-awareness and lust. Will the bevvy of beauties entice him? Will they entice you? Featuring The Suga Shack Girls – professionally trained dancers and Cleveland’s only All Black Burlesque Troupe – “The Coitus Society Soiree” is an hour-long sensual dance production with pulse-pounding music and dazzling costumes. Come dressed in your sexiest attire! Guests are encouraged to indulge their dress up fantasies. Masquerade masks, BDSM apparel…show your dark side at the Soiree! A Lady Slay Production featuring Suga Shack Entertainment. Contains: Graphic Language, Nudity / Sexual Themes. 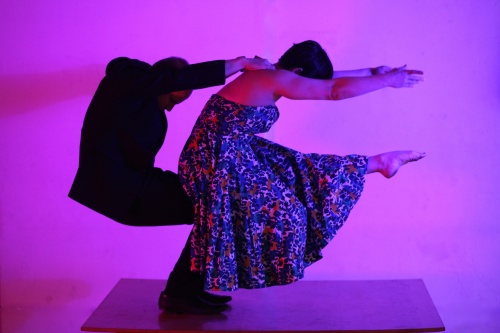 Once upon a time there was a woman and a man. For clarity’s sake, we will call them Mr. and Mrs. — This begins the premise behind Illinois-based Bare Theater’s 50-minute Table For Two, a work mixing dance, puppetry and Lecoq-based physical theater. Says the work’s co-creator Flora Bare, “Mr. and Mrs. are deeply in love and find so much joy being together but they always seem to be struggling to figure themselves and one another out. They want to make each other happy, but just can’t seem to get it right. Mr. and Mrs. decide to go on an adventure together on a boat, where a storm arises. They survive the storm, but something is left behind in those waters.”

Developed in 2017, Table For Two began as a series of movement pieces with some song and a bit of text created through improvisation says former gymnast Bare. Since its initial version, Bare says she “wanted to build up the dialogue to support the movement.” Bare hired a writer to create text based off of the existing movement to match the heightened style in which the movement was performed. “Indeed this show has dialogue, but I do believe that even if a person watching were not to understand the English language, they could understand the story being told,” says Bare.

“This show shifts in and out of memory, reality and the fantastical and at times,” says Bare. “It all seems to bleed together as one might experience when going through a loss.”

Inspired by Sophocles’ Ancient Greek tragedy Antigone, Maryland-based Happy Theater’s AntiCone is the largely wordless story of an immigrant who is put to work building a wall against her country of origin. AntiCone was created by and is performed by Natasha Mirny and Tia Shearer. Says Mirny, who choreographed the 45-minute work, “initially we were just interested in a physical theatre piece centered on traffic cones but as we met to devise the work, we realized more and more that it was difficult to turn the traffic cone into a soft, friendly object. Traffic cones mean boundaries. At that time, there was a lot of talk about “the wall” in the media and from the President [Trump]. So, as devising artists seeking to make a piece for right now, we just naturally folded that in. This old story and these border-creating traffic cones just began speaking to our current [social and political] situation. It was, and is, still a dialogue that invigorates us to share with others.”

Set to a soundscape by Alexander Nikitin that uses percussion and chant, there are moments of text in the piece, says Mirny, but Tia and I “are most interested in what the body can say. That language can sometimes have even quicker and greater access to the heart than words can.” 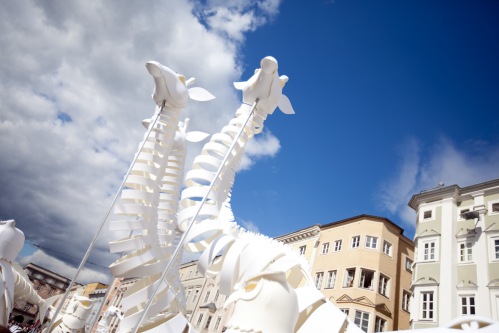 Presented in partnership with Cleveland Public Library’s 150th anniversary celebration, acclaimed South African puppeteer Roger Titley’s Creatures is a free public parade from 3:15-3:30 pm around the streets of downtown Cleveland of life-sized animal puppets powered by human volunteers beginning at Cleveland Public Library’s Main Branch, 325 Superior Avenue and ending at Public Square.  The procession will feature cheetah, kudu, elephants, birds and other puppets. Also a part of the festivities are an African drumming and dance performance of “Toukii – Journey” by Cleveland’s Djapo Cultural Arts Institute from 2:45-3:15 pm, free puppet workshops from 1:00-3:00 pm, and photo opportunities with the puppet “Creatures” on Public Square from 3:30 – 3:45 pm. 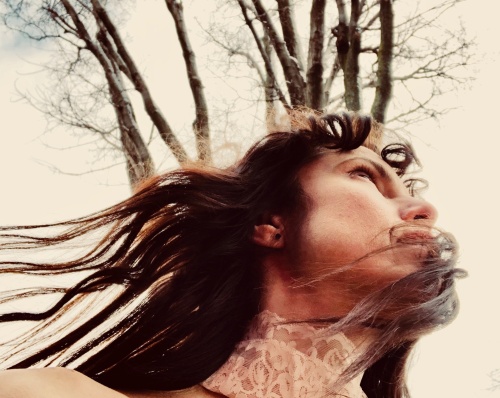