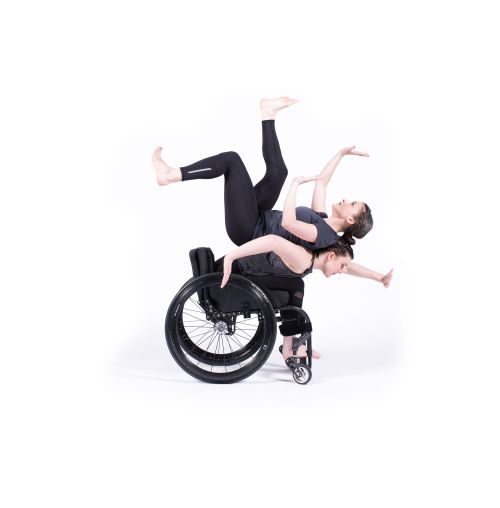 Quite possibly the first dance production of its kind in the United States, Cleveland’s Dancing Wheels, America’s oldest physically integrated dance company (dancers with and without disabilities), will present Reverse.Reboot.Reveal! featuring a trio of commissioned works by a trio of choreographers with disabilities.

The program, Friday, June 14 at Playhouse Square’s Allen Theatre will also coincide with the national Dance/USA Conference being held in Cleveland for the first time.  Says Dancing Wheels founder/artistic director Mary Verdi-Fletcher of the unique production: “Few artists with disabilities have had the opportunity to hone their skills as choreographers. We want to help change that and expand the public’s vision of the artistry of those with disabilities.”

The first of two works on the 2-hour program by choreographers working from wheelchairs, the premiere of award-winning Australian choreographer Marc Brew’s “Od:yssey” explores ideas of restriction.

Brew, the best known of three commissioned choreographers, is the artistic director of Oakland’s AXIS Dance Company. A former ballet dancer and choreographic protégé of resident choreographer of England’s Royal Ballet, Wayne McGregor, Brew says the 16-minute “Od:yssey” represents a journey that starts at its end and works its way backwards. Danced to music by Iceland’s Ólafur Arnalds, the contemporary dance piece also explores a variety of relationships and interactions between the dancers.

A cast of 8 will take on Brew’s challenging choreography he says was born out of improvisation exercises in getting to know the strengths of Dancing Wheels’ dancers. “I always try in my work to get the best out of every dancer,” says Brew.

Next, the premiere of Laurel Lawson’s “the tenderness of things lost and found” had as its creative jumping off point in the dark Russian fairytale of Baba Yaga, a witch who flies around in a mortar, wields a pestle, and dwells in a forest hut standing atop chicken legs.

“I was not setting out to make narrative ballet,” says Lawson. “It’s more abstract and more about mood and relationships.”

A dancer/choreographer with Atlanta’s Full Radius Dance and disabled artists’ collective Kinetic Light, as well as a member of the USA Women’s Olympic Sled Hockey team, Lawson says of her process, “I tend toward making works that are athletic and about connections and emotional truths.”

In a recent rehearsal of the 15-minute piece for 10 dancers set to music by Prokofiev, Zoe Keating, Emmylou Harris and Norwegian folk band Byrdi, I found the work to be sculptural, dramatic and brooding.

In contrast, “Fly” (2012), performed by guest dancers Justin Collin and Florent Devlesaver from Belgium will be an inspirational affair. Choreographed by Collin, the 7-minute duet appeared on the French TV show La France a un incroyable talent (France Has Incredible Talent) in 2017.

Danced to music by Ludovico Einaudi and Ólafur Arnalds, the work, says Collin, was inspired by Devlesaver. “He gives 100% to his passion.  Our friendship was born through dance, and we wanted to share it on the stage.”

The pair met seven years ago and have been performing all over the globe as a duo for the past five. Says Collin, Fly and their other collaborations reflect “The desire to defend the accessibility of dance for all…and to be seen as two dancers, and not as one ‘valid’ person and one person in a wheelchair.”

After an intermission, Reverse.Reboot.Reveal’s second half will lead off with a 16-minute excerpt of Antoine Hunter’s “Giggling Flame and Roaring Waves” (2016); the third work by a choreographer with a disability (deafness).

Hunter, the founder and  director of San Francisco’s Urban Jazz Dance Company and the Bay Area Deaf International Dance Festival, says his piece danced to jazz music by Roy Hargrove and Miles Davis, was inspired by those around him and his upbringing in the Bay area. The work for 10 dancers incorporates into its movement language elements of sign language and afro jazz.

In staging the work on Dancing Wheels’ dancers who do not sign, Hunter took the approach of voicing some instructions and writing others. Says Hunter, “they [the dancers] have to learn my body language and I have to learn theirs. It’s a spiritual thing for us to connect as artists.”

Next, members of the School of Dancing Wheels Performance Ensemble will dance “Goodmorning” to music of the same name by William Fitzsimmons. The 3-minute piece choreographed by school administrator Deborah Reilly and the dancers “highlights the beautiful ability of movement to provide a voice for all.”

Then after a brief presentation by Dancing Wheels board member John Voso, Jr. and Broadway legend and friend of the company Ben Vereen, the program will close with the premiere of company resident choreographer and rehearsal director Catherine Meredith’s “Five by Nina”. The 20-minute work for a cast of 11 to a suite of songs sung by the late Nina Simone says Meredith, reflects on Simone’s life as a singer and civil rights activist as well as her fluid sexuality and turbulent relationship with her second husband.

Immediately following the production the audience is invited to a champagne and dessert reception in the lobby to meet the artists.

The Dancing Wheels Company presents Reverse.Reboot.Reveal!, 8 p.m., Friday, June 14. Playhouse Square’s Allen Theatre, 1407 Euclid Ave., Cleveland. Tickets are $40/General Admission, $35/groups of 10 or more, $30/DanceUSA Members and Conference Attendees (use the code DanceUSA) and can be purchased online at playhousesquare.org or by calling the Playhouse Square Box Office at 216-640-8600.  In addition, $125 VIP tickets are available and include pre-performance hors d’oeuvres, cocktails, silent auction, prime seating for the concert and the post-performance champagne and dessert reception. For VIP tickets visit dancingwheels.org/reverserebootreveal.